The Castello Sforzesco, the Sforza Castle,  is one of the main symbols of Milan and its history. It was built in the fifteenth century by Francesco Sforza, recently became Duke of Milan, on the remains of a previous fortification

After the death of Duke Filippo Maria (1447) the new Ambrosian Republic ordered the complete destruction of the fortress, which fortunately happened only partially. In 1450, the captain of fortune Francesco Sforza took possession of the fortress, beginning the reconstruction.

Initially the works were entrusted to Giovanni da Milano and, in 1451, the works continued under the direction of Jacopo da Cortona. In 1452 the prince hired the Florentine architect Filarete for the construction and decoration of the median tower of the main façade, which began only two years later under the guidance of Bartolomeo Gadio da Cremona. On the death of Francesco Sforza (1466), his son Galeazzo Maria succeeded him and he proceeded to continue the works entrusting the internal part to the architect Benedetto Ferrini,

The current building that traces the original fourteenth century construction while maintaining the moat (not flooded, dating back to the Spaniards) has a square plan with sides 200 meters long with a tower at each corner

The interior is divided into three distinct areas / courtyards: the parade ground that housed the troops stationed, in the middle between the courtyard of the “rocchetta” (the innermost and impregnable part of the “maschio”, where the lords took refuge in case of attack ) and the ducal court which constituted the actual stately residence 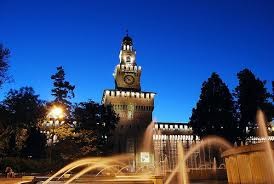 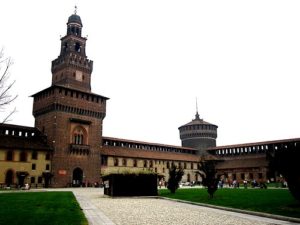 Just to name a few, here are hosted: the Historical Archive, the Vinciana Collection, the Pinacoteca del Castello.

Take the motorway to Gallarate, follow for MILANO CENTRO, park at LAMPUGNANO and from there take the METRO Red line (M1): Cairoli and Cadorna FN stops

AT THE B&B I CASTAGNI ARE AVAILABLE TO THE GUESTS MAPS OF THE CITY OF MILAN AND MALPENSA, IN ADDITION TO ILLUSTRATIVE MATERIAL AND GUIDES OF THE MAIN ATTRACTIONS

Discover some of the most enduring and best loved tourist attractions in Milan and Lake Major area.

There really is something interesting for everyone …

We use cookies to ensure that we give you the best experience on our website. If you continue to use this site we will assume that you are happy with it.Ok